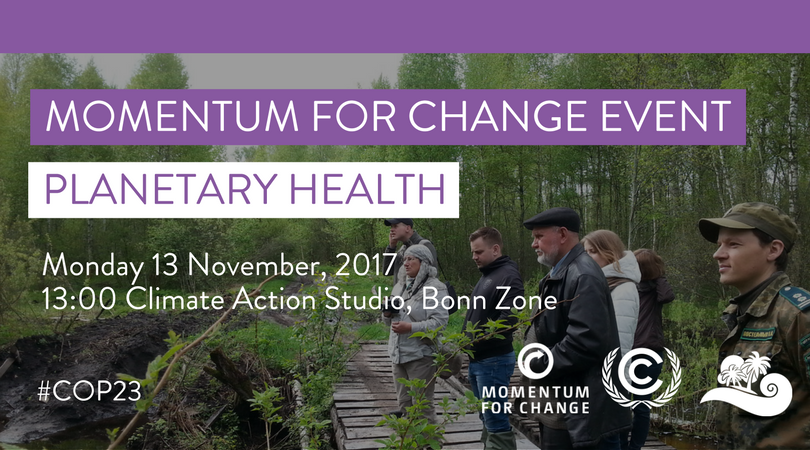 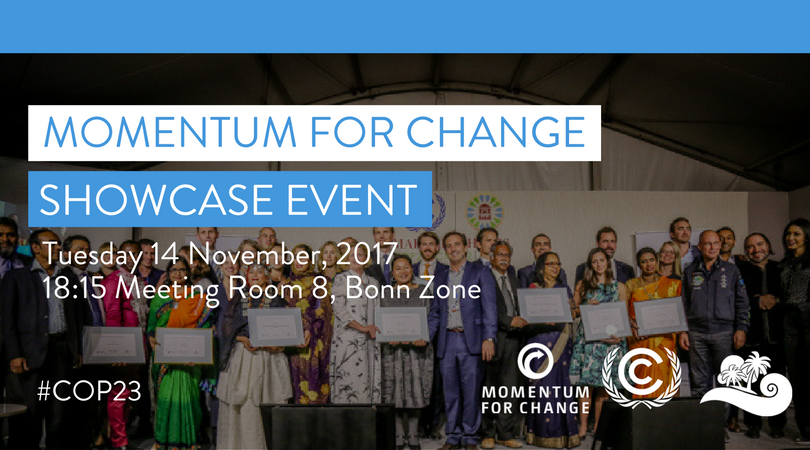 09/11/2017  Restoring peatlands in Russia is one of the largest on-the-ground peatland restoration projects in the world. It is successfully preventing peat fires and subsequent health damages to local people and simultaneously reducing greenhouse gas emissions. The UNFCCC has chosen it to be one of 19 initiatives receiving the United Nations Momentum for Change Climate Solutions Award as lighthouse activities. Wetlands International and the Michael Succow Foundation, partner in the Greifswald Mire Centre, will present the joint project at a roundtable event within the Focus on Planetary Health on Monday 13th Nov. from 13.00-13.45 pm at the Climate Action Studio. A special Showcase Event will feature the 19 winners of the 2017 Momentum for Change Award at 14th Nov from 6.15-8.00 pm at Meeting room 8, Bonn Zone.

At 15th Nov. the Greifswald Mire Centre is part of a high level event Good peatland governance to strenghten economic, social and ecosystem resilience organised by the Global Peatlands Initative. It will be the launch of the Rapid Response Assessment on peatlands at 4.45 pm (meeting room 10, Bonn Zone).

08/11/2017  Published at the beginning of the world climate conference (COP23), the recent „Emissions Gap Report“ of UN Environment summarises current national mitigation efforts and the largest potentials for improved climate protection. This year the report addresses not only the gap in 2020, but also necessary trajectories for later years, especially 2025 and 2030. A key element of the report is an overview on how to close the global emissions gap, for example by peatland restoration. The report has been produced by UN Environment with an international team of experts and with support by the German government. Prof. Hans Joosten‘s (Greifswald Mire Centre) contribution as a co-author is based on data of the Global Peatland Database.

Bringing peatlands into the focus

6/11/2017 During the UNFCCC COP23 the Greifswald Mire Centre is contributing expertise on peatlands in several side events to raise awareness on their potential for climate protection. On 6th November Franziska Tanneberger talked about peatlands as sinks for carbon and sources for carbon emissions at the side event Towards a new compact on peatlands for climate protection. The side event was organized by the Federal Agency for Nature Conservation (BfN) together with FAO, UNEP, NABU and others, and started at 10.00 am at the German Pavilion (Bonn Zone). On 10th November at 4.45 pm GMC and Wetlands International are stressing the Urgent need for local action to sustain peatlands globally . Beside multi-national corporations, communities are key players in peatlands. They need to be supported towards adapted management of their land. Jan Peters presents Strategic environmental dialogues on Caribbean coastal peatlands, a project promoting coastal peatlands as protection against extreme weather events in the Caribbean. In the 2nd week of COP 23, GMC contributes to a high-level side event of the Global Peatlands Initiative on 15th November.
For further information here a calendar of important peatland-related events at COP23.

31/10/2017  A recent paper Natural climate solutions published by the National Academy of Sciences of the USA (PNAS Oct. 2017; vol. 114 no. 44) examines how much nature can contribute to climate mitigation and holding global warming below 2 °C. The authors considered 20 land management actions. Their result: Avoiding peatland emissions and restoring drained peatlands is a priority to achieve the Paris Climate Agreement. Data of the Global Peatland Database provided a basis for this assessment.

13/10/2017  The Greifswald Mire Centre was most happy to hear: Peatland restoration in Russia is one of 19 winners of the United Nations ‘Momentum for Change’ Climate Solutions Awards 2017! The project is spearheading the restoration of peatlands in Russia, thus reducing the incidence of fires in peatland areas and the resulting CO2 emissions and smoke particulates.
Michael Succow Foundation and Greifswald University, both partners in the GMC, are strongly involved. Out of 460 applications 19 ground-breaking initiatives from around the world will be honoured at the UN Climate Conference (COP23) in Bonn in November.

What all agreed on: RRR2017 final statement

04/10/2017  The concluding statement of the 2nd International Paludiculture Conference “Renewable resources from wet and rewetted peatlands (RRR2017, Greifswald 27-29 September 2017))” boils down on 4 pages what approx. 200 peatland scientists, practitioners and activists agreed on: Urgent action needed – stop drainage, rewet, implement paludiculture large scale! That’s because drained peatlands hamper the achievement of the Paris Agreement and the Sustainable Development Goals. Damages include enormous economic and environmental losses through greenhouse gas emissions, peat fires, loss of biodiversity, water pollution, soil degradation and desertification, and subsidence followed by an eventual loss of productive land. Thus peatlands have to be kept wet and productive! Paludiculture offers the solution to mitigate climate change and to adapt to effects of a changing climate such as sea level rise, droughts, and floods.

Paludiculture for the planet

Paludiculture for the planet!

27/09/2017  There is power in peatlands! At the International Paludiculture Conference RRR2017 - Renewable resources from wet and rewetted peatlands 27th-29th September in Greifswald scientists, practitioners and politicians discuss how to tap their potential for climate protection, alternative agriculture and saving great socio-economic costs. Text: Wet peatlands protect the world’s climate as gigantic carbon sinks. Drained peatlands, in contrast, globally emit over 2 Gt of carbon dioxide per year. To reverse this dramatic climate damage peatlands must be rewetted and can often still be cultivated. Paludiculture – the utilization of wet peatlands – can chant the spell and deliver renewable energy resources and biomass for building material or fodder while substituting fossil resources. Apart from this, wet peatlands offer ecosystem services such as nutrient removal, water retention and habitat provision. Almost 200 scientists, land owners, land users and environmentalists assemble at the RRR2017 to promote this promising and necessary concept.

22/09/2017  The art exhibition RUMOOREN! offers unusual perspectives on peatlands. Organised by the Greifswald Mire Centre in cooperation with the Caspar-David-Friedrich-Institute of Greifswald University, exhibits by 19 artists are presented, e.g. turf installations and typha cushions. The art pieces are intended to promote wider public perception of peatlands, climate protection and sustainable use. The use of peat in art is critically reflected.
About one hundred art and peatland lovers attended the vernissage on 24th September. RUMOOREN! is part of the international paludiculture conference week Renewable resources from wet and rewetted peatlands 2017. The exhibition is open 25th-28th September 8 am – 8 pm and 29th September – 8th October 12 am - 6 pm at the Caspar-David-Friedrich-Institute (Bahnhofstraße 46/47, Greifswald). The entrance is free.

07/09/2017  : Less than one month to go until the international paludiculture conference week RRR2017 from 25th - 30th September 2017 organised by the Greifswald Mire Centre starts. It offers a national and an international conference, a day of excursions and a Sphagnum farming workshop. The GMC is happy to welcome Prof. Ab Grootjans, Prof. Hans Joosten and Faizal Parish as key note speakers.
Besides the extensive scientific programme there is an amazing range of interesting related events: A show of machinery and technical equipment for agriculture of wet peatlands will occupy the entire market square in the heart of Greifswald on Wednesday 27th . Take the chance for a close look at e.g. modified snowcats or balloon tired reed harvesters! Stroll around in the ‘paludarium’ at the Botanical Garden of Greifswald University (Münterstraße 2, Greifswald) to see an exhibition of potential paludiculture plants and find more than 40 exhibition describing their use. See peatlands in new perspective and visit "RUMOOREN - Kunst trifft Moor" - an art exhibition initiated by the GMC in cooperation with the Caspar-David-Friedrich-Institute of Greifswald University. “RUMOOREN!” shows contributions by 20 artists aiming for public awareness and social exchange to gain more acceptance and understanding for peatland protection. Join a musical, literary journey “Between worlds in the wafts of mires” or an evening with nature conservationist Michael Succow. The biologist and laureate of the “Right Livelihood Award” takes you on a journey from bogs of Northwestern Germany via mires of the Southern Baltic Sea area up to the central German uplands and the Alps.

05/08/2017  The Verified Carbon Standard (VCS) is the world’s leading voluntary programme for the certification of greenhouse gas emission reduction projects. The methodology outlines procedures to estimate the reduction of net greenhouse gas emissions resulting from project activities implemented to rewet drained peatlands in temperate climatic regions. It uses ground vegetation composition and water table depth as proxies for peatland greenhouse gas emissions, known as the ‘GEST’ approach (GEST: Greenhouse gas Emission Site Type), which has been developed at the Greifswald Mire Centre. The development of this methodology was funded by the Federal Ministry for the Environment, Nature Conservation, Building and Nuclear Safety (BMUB) within a peatland restoration project of the International Climate Initiative, the University of Greifswald, Partner in the Greifswald Mire Centre, and Silvestrum Climate Associates. Authors of the methodology are Dr. Igino Emmer (Silvestrum Climate Associates) and John Couwenberg (Greifswald University, Partner in the Greifswald Mire Centre).