Triple win for climate, people and the planet

Triple win for climate, people and the planet

03/12/2018  Tropical peatlands are in focus of a high level event at the Global Landscapes Forum (GLF) 1st December 2018. With the Event Protecting Tropical Peatlands Together distinguished officials from the Republic of Congo, Indonesia, Germany and the Ramsar Convention joined forces for a better understanding of tropical peatlands and thus a better conservation and sustainable management. The session highlighted Indonesia and the Republic of Congo’s commitments to high level South South collaboration on management, restoration and protection of peatlands. Along with H.E. Siti Nurbaya, Minister of Environment and Forestry, Indonesia, and Arlette Soudan-Nonault, Minister of Environment and Tourism, Republic of Congo, also Hans Joosten (GMC) joined the session and shared his insights on priorities in peatland management. See the session here.

Conference ‚Peatlands must be wet! Climate protection by peatland conservation‘

26/10/2018  ‚Peatlands must be wet!‘ was the key message of the conference on peatland and climate protection 26th October 2018 in the Ministry of Environment in Berlin. To comply with national and international obligations and minimise greenhouse gas emissions from peatlands by 2050, some 50,000 ha need to be rewetted annually. A large share could be transferred from ‚dry‘ agriculture and forestry to ‚wet‘ agriculture and forestry. The Project German Peatland Dialogue(National Climate Initiative) has facilitated exchange between farmers, water management authorities, nature conservation bodies, scientists and politicians, and stimulated progress in peatland management in the last three years. The final conference clearly showed what is needed: a clear political framework, financial incentives and compensation, brave entrepreneurs, and sound accompanying research. More information can be found in the press release on the Ministry of Environment. 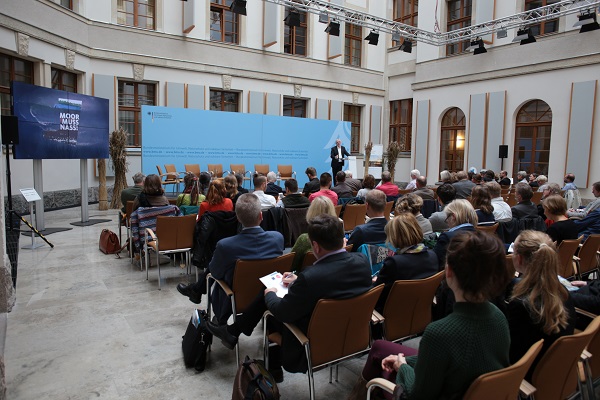 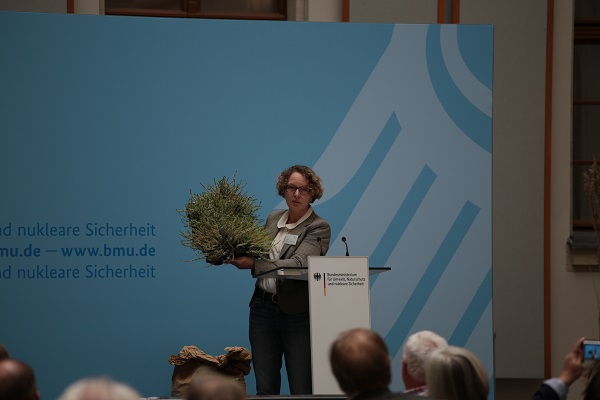 Europe's largest cultivation area is being set up

03/10/2018  Cultivating sundew for its medical purposes, is an endeavour Balazs Baranyai und Dr. Jenny Schulz have been pursuing for more than six years. Now, they are actually setting up the largest cultivation area for sundew in Europe - at Breesener Moor, a cut-over peatland within the biosphere reserve Schaalsee-Elbe (Mecklenburg-Western Pomerania). A water reservoir will be installed this autumn and a peat moss-sundew culture established in spring next year.
Six years ago both peatland scientists sowed first sundew seeds on a peat moss lawn, followed by numerous cultivations experiments. 2015 they succeeded in obtaining a sustainable sundew cultivation in combination with peat mosses and founded the PaludiMed GmbH – a first spin-off from the Greifswald Mire Centre. With the new cultivation area they bring pilot trials into large-scale production. Dr. Till Backhaus, Minister for Agriculture and Environment of Mecklenburg-Western Pomerania, opened the official ground-breaking ceremony in the Breesener Moor with numerous guests.

03/09/2018  After a long ride, Hans Joosten, John Couwenberg and Mira Kohl arrived today with a van full of books at the GMC. Professor R.S. (Dicky) Clymo (Queen Mary University of London, UK) has donated a large part of his personal library to our Peatland and Nature Conservation International Library (PeNCIL) . We feel deeply honoured and are very thankful. During the visit, Dicky Clymo received greetings and signatures of the General Assembly of the International Mire Conservation Group (IMCG) , which granted him Honorary Life Membership 31.08.2018 in Utrecht. Dicky Clymo is long-term IMCG supporter, editor of the journal Mires and Peat, and has influenced and stimulated generations of peatland scientists. In hope - studying peatlands for ever!

GMC, DVL and MoorFutures at the Open Day

25/08/2018  Federal Minister for Environment Svenja Schulze enjoyed rewetting a peatland at small scale. She is well informed about the importance of peatlands. At the Open Day 2018 in the Ministry of Environment, Tobias Dahms und Monika Hohlbein (both GMC) explained how peatlands and climate protection are connected in detail. The minister and her parliamentary secretary of state Rita Schwarzelühr-Sutter learnt about the Project MoorDialog and about the urgent need for action in the implementation of a climate-friendly, wet management of previously drained peatland sites. In particular, setting up demonstration facilities, their scientific monitoring, and removing constraining factors to wet(ter) peatland management were discussed. The GMC attracted many visitors with mires plants and products to its joint booth with the Deutsche Verband für Landschaftspflege (LPV).

21/08/2018  The Assessment Report on Biodiversity and Ecosystem Services for Europe and Central Asia (IPBES/6/INF/6/Rev.1 ) was recently published as extended report by the Intergovernmental Science-Policy Platform on Biodiversity and Ecosystem Services (IPBES). IPBES is an intergovernmental body that provides politics with scientific advice, comparable to the Intergovernmental Panel on Climate Change (IPCC). Contributing authors of chapter 3 (Status, trends and future dynamics of biodiversity and ecosystems underpinning nature’s contributions to people) are Hans Joosten and Franziska Tanneberger (both GMC). The report sheds light on peatland distribution and degradation using data of the GMC’s Global Peatland Database and links climate destruction due to peatland degradation and biodiversity loss.

03/08/2018  To see how paludiculture looks in practice the Indonesian ambassador H.E. Dr. Arif Havas Oegroseno paid a visit to Western Pomerania following an invitation of the Greifswald Mire Centre.
Similar to Germany, Indonesia suffered huge environmental damage due to peatland drainage for agriculture. In Indonesia, large scale peat fires additionally worsened the situation and also caused severe health problems for the population. Today the country sees rewetting and paludiculture as a solution and is gathering information how to use peatlands wisely. Indonesia has recently set up a Peatland Restoration Agency and has rewetted in 2017 some 200,000 ha – as much as entire Europe in its history.

The GMC took ambassador Oegroseno to drained peatlands at polder Bargischow and rewetted peatlands at Anklamer Stadtbruch. Here, Patrick Dahlemann, Secretary of State for Western Pomerania welcomed the ambassador and joined him for a visit in a dense, productive reedbed under almost tropical temperatures. In the small village of Kamp the group observed the harvesting of cattail and learnt about traditional and innovative forms of paludiculture. At the site of the Wetland Products Foundation reed cutting companies from Anklam region, Rügen island and Schleswig-Holstein together with Dutch companies specialised in mowing machinery for wetlands shared their knowledge with the guests. Patrick Dahlemann welcomed this ‘peatland connection’ and stressed the potential of combining environmental and socio-economic benefits by implementing peatland rewetting and paludiculture.

In the cool historical buildings of Greifswald University, the prorector for Research and International Affairs Prof. Dr. Katharina Riedel introduced the ambassador to the history and main research topics of Greifswald University. Ambassador Oegroseno showed much interest in research cooperation and announced to explore possibilities for setting up an ERASMUS partnership. Further steps in cooperation were also discussed with the Michael Succow Foundation, where Prof. Dr. Michael Succow welcomed the ambassador.

28/06/2018  Leaflets on paludiculture are now available for download in Estonian, Lithuanian as well as in Latvian - here separately on paludiculture on bogs and on paludiculture on fens. The information material, originally edited by the Succow Foundation and the Greifswald Mire Centre, was edited and translated by Baltic peatland experts and the Michael Succow Foundation, pertner in the Greifswald Mire Centre within the project Paludiculture in the Baltics - Potential and Capacities for climate protection through productive use of rewetted peatlands. The project, sponsored within the European Climate Initiative, analyses whether drained peatland areas in the Baltic states can be rewetted and sustainably used, and - if so - which ones. These measures could effectively reduce CO2-emissions, create altenative sources of income and conserve peatlands as habitat for highly specialised species. 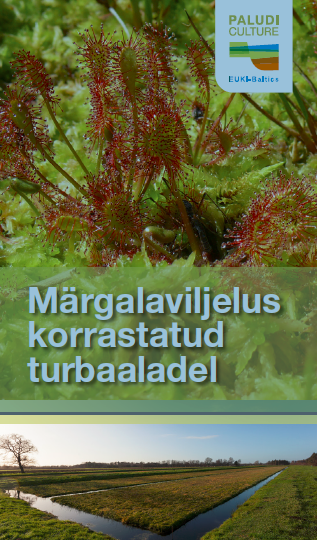 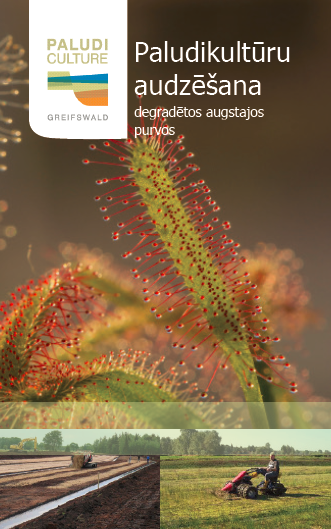 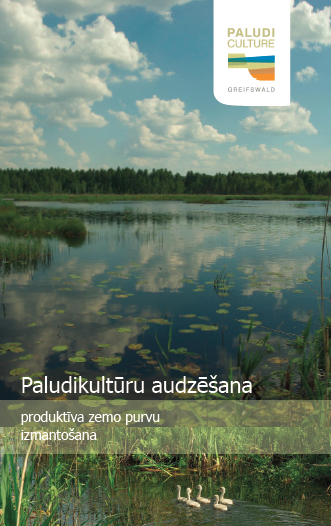 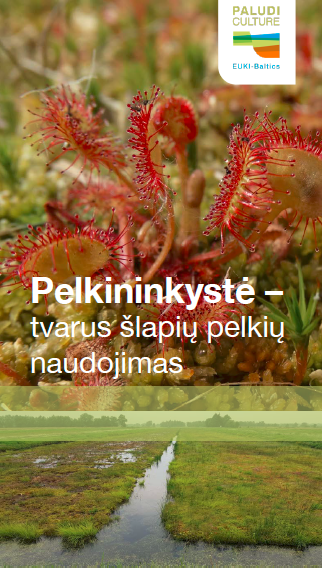 28/05/2018  A small group of peatland scientists from GMC and International Mire Conservation Group (IMCG) just returned from southern Belarus. The group has discussed water management at Zvaniec Mire, one of Europe’s largest near-natural peatlands. The site holds about 25% of the world population of the globally threatened Aquatic Warbler. Recently, habitat conditions have deteriorated and the site is now classified as Important Bird Area (IBA) in danger. The group identified main directions of future monitoring and studies to improve water management. Together with experts from the Belarusian Academy of Sciences and the Lithuanian-Belarusian LIFE project on the Aquatic Warbler, concrete steps and increased cooperation was agreed to better understand and protect this and other fens in Polesie region.

04/05/2018 The programme for the upcoming peatland restoration workshop "Peat under Water" being held in north-eastern Germany from 5th to 6th September 2018 is now ready:
The workshop will cover carbon and nutrient biochemistry, GHG exchange as well as biodiversity and biotic development of flooded peatlands. Detailed information at www.wetscapes.de/peatunderwater. The deadline for registration is 1st June 2018.